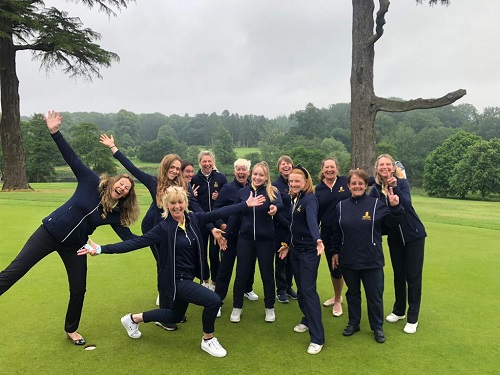 Schedule of matches and results may be seen here

The weather was much better than forecasted as we entered the final day with lots of sunshine, a change from previous years.

Yesterday we had Swangate where an aggressive male swan refused to let a player get to her ball. The referee had to invoke the dangerous animal rule. Who knew such a rule would have to be applied in rural Northamptonshire.

Anyway, today we were against Worcestershire and Herefordshire and first out in the foursomes were Rachel and Lauren. They were 4 up after 7. On the 15th par five Rachel drove and Lauren’s shot landed, from some 200 yards, inches from the pin to give them an eagle. What an amazing shot. Lauren had a superb drive on the par 3 16th and the pairing romped home to victory.

The second out were Claire and Lilly. They were up and down throughout, eventually 3 up on the 15th but alas lost the next three, so the match was all square.

Lisa was first out in the singles. She played well, was steady, made birdies again and took her opponent as far as she could, but a long putt from her opponent on the 16th meant she lost 3 and 2.

Zara was next out. She played well but said her opponent was the toughest she had played all week and she lost the match.

Last out was Liz. This was a fantastic match. Liz was 2 up most of the way but lost the 13th and then the 15th to an eagle. They were all square after the 17th so the 18th was crucial for Warwickshire. Both girls drove well. Liz chipped onto the green but her opponent chipped her second shot out of the bunker to close to the pin. Liz’s putt therefore was crucial and under amazing pressure, and with class, she put it in for the birdie and the win.

So overall, after a very enjoyable time and with everyone playing so well and giving of their best, Warwickshire won one match, halved two and lost two and were fourth overall. Winners were Buckinghamshire, second Northamptonshire, third Worcestershire and Herefordshire, fourth Warwickshire, fifth Berkshire and sixth Oxfordshire.

The Cup for player of the week, voted for by the team, was deservedly awarded to Zara Houghton.

In the morning we had our match against Berkshire. The weather was quite cool and windy.

The first foursomes was played by Claire and Lilly. By the 8th they were 1 up. The par 3 16th needing a drive over water to an elevated green was interesting. Lilly’s drive went over the lake like a Barnes Wallace missile but didn’t make it. Claire hit from the drop zone and landed by the pin. However Berks thinned their shot and somehow the Warks girls won the hole. They were all square after the 17th. On the 18th Lilly sank a gorgeous putt to win the match one up.

Sadly the girls couldn’t quite make it and lost the match by one hole. It was lovely though to see them so relaxed and chatting throughout.

Lisa led the way in the singles but despite playing very steadily lost on the 18th.

Zara was second out in the singles. By the 12th she was 3 down but then won the 13th.  On the 14th her drive was in a downward lie on the fairway behind trees. She flushed a rescue onto the green over the trees and two putted for a birdie. She was still one down after the 17th but never stopped battling and won the 18th for a half.

Liz was last out, and in her words, was very up and down. She started with a great birdie on the first with her second shot being pin high. At the turn she was 2 up, down to one up after the 17th and won the 18th to take the match by two holes.

So the morning result against Berkshire was a halved match.

The afternoon match started from the 10th and was against Northamptonshire who fielded a very strong and young team.

Annabel and Lauren played the first foursomes match. They played steadily. At the 11th Lauren almost chipped in and Annabel got the putt for a birdie. Lauren earned a round of applause at the thirteenth hole when she hit out of a bunker while on her knees. Unfortunately the pairing lost 4 and 3.

Rachel and Zara played the last foursomes of the day.  They had an awesome game with Zara holing a ten foot putt on the 16th for a birdie to go 2 up. They won the match 2 and 1.

Liz went out first in the singles. She was up against a formidable opponent, playing on her home course, off plus one and destined for Keiser University in Florida. The first three holes were halved. The par five 14th summed up the match. Both girls were on the apron for two and Liz made birdie. Her opponent eagled it. As Liz said, how can you lose a hole when you have birdied it? By the turn Liz was 4 down, fought back to be 2 down but eventually lost 4 and 2.

Holly played the second singles match. She did really well but her opponent definitely had the run of the green and Holly lost 3 and 2.

Lisa brought up the rear, played really valiantly but succumbed on the 17th hole.

So the afternoon result was a defeat with Warwickshire winning one match out of five but they all certainly played their best.

Following the morning’s success, Captain Veronique selected the same team for the afternoon match against Buckinghamshire. Play started from the 10th tee and the weather turned cooler but remained dry. Unfortunately, against a very strong Bucks team and despite playing well, the Warwickshire girls could not emulate the morning’s triumph.

Claire and Lilly led out in the foursomes and eventually lost 6 and 4. But this score does not reflect the very high standard of golf played by them, for example at the first Claire hit a superb shot out of a bunker and Lilly holed the putt.

Rachel and Annabel did not fare well either, losing 7 and 6. It may well be a sign of the times that the combined age of the Warwickshire pair was 101, competing against a Bucks combined age of 27. Clearly there’s a future for ladies golf.

In the singles Liz played Megan Dennis and was 3 up after 5, aided by a flurry of birdies. But her lead gradually eroded and she was one down by the 17th and was only able to halve the 18th. It was a shame she was not able to match her morning success, especially as it was her birthday.

Zara was second out, against Alice Kozlowski. After eight holes the match was all square but by the 14th Zara was one up. On the 16th she sank a long putt which was a match changer to stay 2 up, and she won by 2 holes.

Finally Lisa played Thalia Kirby, an England international who plays off plus 4. Lisa scored more birdies than she had in the morning and played remarkably well but unfortunately lost to a very formidable opponent 5 and 3.

So after the first day of play we had beaten Oxfordshire 5-0, and lost to Buckinghamshire 1-4. Spirits remain high.

Well, what a cracking start to the week with our first match against Oxfordshire. The weather was cool, cloudy and a little windy but stayed dry.

First out were Rachel Rusted and Annabel Edmond in a foursomes match against Maggie Finlay and Freya Coughlan. After a shaky start the Warwickshire girls really gained momentum and won 4 and 3.

Next up in the foursomes were Claire Howells and Lilly Phelps playing against Sally Woolven and Clare Dodds. Claire and Lilly were all square after nine. On the 12th Lilly chipped in to go one up. On the 15th Claire holed a vital seven foot putt to stay 2 up, and then on the 16th, Lilly sank a 20 footer to win the match 3 and 2.

The first singles match was between Lisa Barton and Millie Anderson. Lisa was 2 up after 2, 3 up after 8 and on the 10th chipped in for a birdie. They were dormy three after the 15th. The 16th, a difficult par three to be driven over a lake, saw Lisa come up short in the rough but she managed to hole out for three and so won the match 3 and 2.

Next out was Zara Houghton, playing against Vicky Hart. Zara was two up after the 7th, and then sank a thirty foot putt on the 8th to pull further ahead. She continued playing very steadily and birdied the 13th to go 5 up. On the 14th she found the bunker in two but her opponent had landed in the trees and Zara was able to win the hole and therefore the match by 6 and 4.

Bringing up the rear was Liz Haycock against Kate Evans. Liz’s drive on the first was not one of her best but she rescued the situation with a superb second shot on to the green. On the 5th and 6th she scored back-to-back birdies, narrowly missing out on a hole in one on the 5th, and went on to win 7 and 5.

So, five matches and five wins. There cannot have been a better start.

Sunday 20 June was practice day for the team and, after tips from Coach Alison on how to get out of the rather treacherous rough, the team is fired up and raring to go. Unfortunately Emma Morton has had to pull out due to injury.

We wish the team every success over the next three days and President Bobbi and Captain Veronique would be delighted to welcome as many supporters as possible.