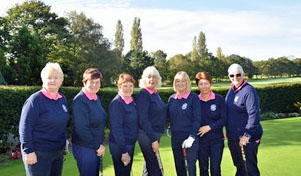 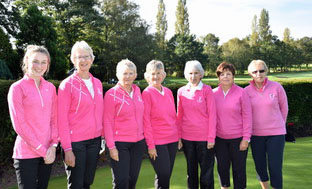 The forecast promised incoming heavy rains on Monday 30th September when the WLCGA Inter Club League Final was scheduled at Handsworth Golf Club. On advice we requested the teams of Nuneaton and Rugby arrive early and they tee’d off in advance, under clear blue skies and in warm sunshine.

Leading out the teams were Rachel RUSTED 6 (Nuneaton) and Judith PEGLAR 8 (Rugby) – a good match ensued where Judith birdied the pars 3,  & won her shot holes gaining a victory for Rugby 3 & 2

Jan BARNETT, 15, (Nuneaton Lady Captain) versus Rugby Junior Phoebe ANDERSON, 12, were the 3rd Match. Phoebe played the 9th well just missing out on a birdie and reduced her deficit to -2 at the turn. However it was not the comeback she hoped for – with drives occasionally wayward and a few missed putts – she lost to the tenacious Jan on the 15th, 4 & 3

Things were getting exciting at the 14th green, a great vantage point, where the gallery was milling and matches were potentially concluding. Nuneaton’s winning steak was becoming evident.

In matches 5 & 7, Nuneaton were showing strongly at the turn being +5 and + 6 everything was going their way!

The clouds appeared and thickened during the day but the precipitation did not materialize until after all the matches were completed and we were in the club house enjoying a well deserved lunch.

An excellent match whose results of 6 : 1 to Nuneaton belied the fighting spirit of Rugby and the wonderful camaraderie of all who played … and supported!