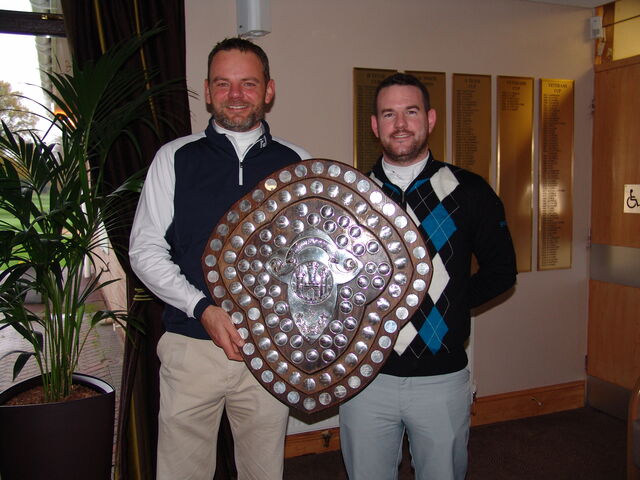 This year we had an impressive total of 63 pairs enter this foursomes knockout event, where matches are played over 18 holes home and away until the 36 hole final which is always held at a neutral venue.

One of the Semi Finals ensured one Coventry team would reach the final event with their A team facing their B team. Coventry’s A team managed to over turn the B team meaning Matthew Cryer and Rob Browning would play in the final.

The other Semi Final was a strong Copt Heath B side against Atherstone A. The Atherstone team of Clayton Turvey and Rich Evans prevailed and would face Coventry A in the last match.

At relatively late notice Maxstoke Park very kindly agreed to host the 36 hole final on 14th November, the course was presented very well for the time of year and especially considering the wet and windy conditions the Midlands had faced in the week leading upto the event.

As daylight was at a premium and the forecast didn’t look pretty later in the day the first round started at 7:30am prompt, to ensure a result could be found if rain did stop play for a short time or extra holes were needed before dark. Thankfully during the course of the day we had very little rain to speak of and the course held up perfectly to the rain we did receive.

Due to the sticky, damp conditions and the ball flying considerably less than normal, it would be fair to say that the standard of golf over the early holes was not especially sparkling but steady.

Coventry’s pairing of Matthew Cryer and Rob Browning both playing off plus 2 built an early lead of 3up after the first 9 holes mainly as a result of chipping, pitching and putting a little better than their opposition. Although, Athertsone’s pairing of Clayton Turvey (1 handicap) and Rich Evans (7 handicap) were holding up admirably considering the handicap difference.

After 18 holes Coventry remained in the lead at 5 up with a gross score of 3 over par with only 3 birdies between both teams. The scoring was better in the afternoon round with Coventry continuing to chip away at Atherstone over the front nine holes and with 3 early birdies conceded early on to Coventry against 1 birdie from Atherstone on the 5th, meant Coventry’s lead crept up to 7 after 25 holes.

Coventry kept the pressure on over the par 5 8th hole and tricky par 3 9th taking their lead to 9up due to a couple of Atherstone’s putts sliding by the hole. After placing their approach on the par 4 10th hole to a few feet in regulation and Atherstone just missing long of the green a birdie was conceded and Coventry crowned Bainbridge Shield Champions for 2015.

A short presentation was held in the clubhouse after where Vice Captain of Maxstoke Park presented the large shield to the winners and medals to both sides. Thanks were conveyed to Maxstoke Park for hosting the final and praise given to the greenkeepers for preparation of the course.

Finally, it would be remiss of me to not point out that although the margin of victory was substantial at the conclusion of the match there actually wasn’t too much difference to be seen in the long game between both teams. Especially taking into consideration the handicap differences of the players, both tee shots and approach shots were relatively well matched and would be difficult to see a clear victor from that alone.

However, the short game of Coventry’s pairing on the day was a little crisper and recoveries from wayward shots better, and unfortunately Atherstone did graze the hole too many times instead of finding the bottom of the cup. There certainly seems to be some truth in the old adage of “drive for show and putt for dough”!

Well done and thank you to all teams in the Championship for timely play of your matches, special congratulations to our Champions Coventry and many commiserations to Atherstone who continued to fight admirably to the end.